A software synthesizer or softsynth is a computer program that generates digital audio, usually for music. Computer software that can create sounds or music is not new, but advances in processing speed now allow softsynths to accomplish the same tasks that previously required the dedicated hardware of a conventional synthesizer. Softsynths may be readily interfaced with other music software such as music sequencers typically in the context of a digital audio workstation. Softsynths are usually less expensive and can be more portable than dedicated hardware.

Many popular hardware synthesizers are no longer manufactured but have been emulated in software. The emulation can even extend to having graphics that model the exact placements of the original hardware controls. Some simulators can even import the original sound patches with accuracy that is nearly indistinguishable from the original synthesizer. Popular synthesizers such as the Moog Minimoog, Yamaha DX7, Korg M1, Sequential Prophet-5, Oberheim OB-X, Roland Jupiter 8, ARP 2600 and dozens of other classics have been recreated in software.

Some softsynths are heavily sample-based, and frequently have more capability than hardware units, since computers have fewer restrictions on memory than dedicated hardware synthesizers. Some of these sample-based synthesizers come with sample libraries many gigabytes in size. Some are specifically designed to mimic real-world instruments such as pianos. Many sample libraries are available in a common format like .wav, .sf or .sf2, and can be used with almost any sampler-based softsynth.

The major downside of using softsynths can often be more latency (delay between playing the note and hearing the corresponding sound). Decreasing latency requires increasing the demand on the computer’s processor. When the soft synthesizer is running as a plug-in for a host sequencer, both the soft synth and the sequencer are competing for processor time. Multi-processor computers can handle this better than single-processor computers. As the processor becomes overloaded, sonic artifacts such as “clicks” and “pops” can be heard during performance or playback. When the processor becomes completely overloaded, the host sequencer or computer can lock up or crash. Increasing buffer size helps, but also increases latency. However modern professional audio interfaces can frequently operate with extremely low latency, so in recent years this has become much less of a problem than in the early days of computer music.

It is also possible to generate sound files offline, meaning sound generation does not have to be in real time, or live. For example, the input could be a MIDI file and the output could be a WAV file or an MP3 file. Playing a WAV or MP3 file simply means playing a precalculated waveform. The advantage of offline synthesis is that the software can spend as much time as it needs to generate the resulting sounds, potentially increasing sound quality. It could take 30 seconds of computing time to generate 1 second of real-time sound, for example. The disadvantage is that changes to the music specifications cannot be heard immediately.

Often a composer or virtual conductor will want a “draft mode” for initial score editing and then use the “production mode” to generate high-quality sound as one gets closer to the final version. The draft mode allows for quicker turn-around, perhaps in real time, but will not have the full quality of the production mode. The draft render is roughly analogous to a wire-frame or “big polygon” animation when creating 3D animation or CGI. Both are based on the trade-off between quality and turn-around time for reviewing drafts and changes. 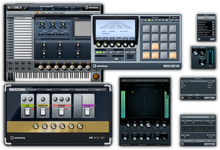 Stand-alone softsynths run as a program on the computer so additional software is not required. Plugin softsynths require a host application such as a digital audio workstation, which records the music that is played. Common plugin technologies include VST, AU, and LADSPA.

Software synthesizers can have more advanced algorithms than digital hardware synthesizers due to the much greater processing speed (as well as support for floating point processing and greater than 24-bit word size) of the x86-64 CPUs that modern music production personal computers have over the digital signal processors found in common hardware synthesizers. The advantage to dedicated hardware is that it can be more stable, and also that it often has a user interface that is physical (knobs and sliders) and therefore easier to manipulate during performances. Many softsynths use mathematical algorithms that directly emulate the electronic components and circuitry of the original hardware synthesizer. This produces an exceptionally authentic sound, even capturing flaws in the original hardware, such as oscillator drift caused by thermal sensitivity of the components.

Software Synth developers such as Arturia offer virtual editions of analog synths like the Minimoog, the ARP 2600, as well as the Yamaha CS-80. Gforce produces a Minimoog with sounds designed by Rick Wakeman and version of the ARP Odyssey. 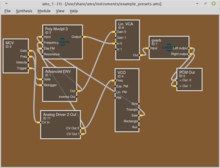 ZynAddSubFX is an free and open-source software synthesizer for Linux, macOS and Windows. It can generate polyphonic, multitimbral, microtonal sounds in realtime.[2]
It is a free program, licensed under version 2 of the GNU General Public License.

The Microsoft GS Software Wavetable Synthesizer (based on sample-based synthesis) included in instances of DirectX as an integral part of DirectMusic is a version of the Roland Virtual Sound Canvas with the GS sound set licensed by Microsoft from Roland Corporation in 1996.[3] The file, GM.DLS, containing the samples is in DLS format.

The integrated processors included in mobile phones have become so fast, that synthesizer applications (apps) can play with the same capabilities as the classic analog or digital synths. They can have several oscillators with pulse-width modulated waveforms, frequency- and amplitude- modulation, ADSR envelope forming, and a number of digital sound processing effects like filter, exciter, delay, chorus and reverb. One example is the Windows Phone Synthesizer.

Recently, there have been many virtual synthesizers released for Apples iOS devices (iPad, iPhone, and iPod Touch). Many of these are from independent developers. Hardware manufacturers have also released apps for the iPad and iPhone including Moog Music, Korg, Roland Corporation, Akai and Tascam.

Apple Logic Studio comes with a variety of Software Synths including FM, Bass, Analog, Ensemble as well as Electric Piano and Hammond B-3 emulation.

List of some of the earlier softsynths for PC[edit]